You are here: Home » News » News » Legalization of cannabis in the United States in 2022

Legalization of cannabis in the United States in 2022

At present, the United States has not yet legalized federal marijuana, which is limited to states. There are three degrees of legalization in American States. This includes four United States territories in the Atlantic (Puerto Rico and the United States Virgin Islands (USVI)) and the Pacific (Guam and the Commonwealth of the Northern Mariana Islands (CNMI)). 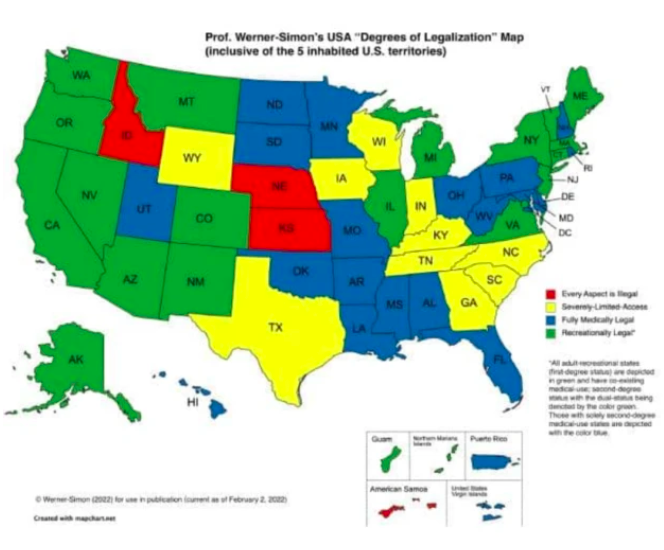 The first tier states are represented in green on the legalization map above.

Secondary states are shown in blue on the legalization map above.

The third tier states include states where the state legislature allows strict restrictions by law (usually with low or negligible THC content), which are marked in yellow on the legalization map.

South Carolina's SLA law was passed in 2014, named "Julian law" after a brain damaged South Carolina baby who had epilepsy and had to leave the state for a legal state (Colorado) to treat epilepsy that afflicted the child's body.

Other three-tier SLA countries restrict not only the ingredients of products and their medical uses, but also the way of intake, the management or place of acquisition of products, and sometimes only research institutions.

This month, Mississippi witnessed the latest evolution from a level III restricted state to a level II medical use state.

On February 2, 2022, Tate Reeves, the Republican elected in 2019 and governor of Mississippi, signed the medical use (secondary) legislation into law. This ended a 15 month stalemate between Mississippi voters and their lawmakers.

Other severely restricted tertiary states are considering legalizing medical marijuana. These include South Carolina and Kentucky.

In February 2022, state legislators introduced a series of marijuana bills to legalize adult use and medical marijuana. The proposal announced by Kentucky Democrats in both houses on February 17, 2022 is called "let's grow bill".

In Ohio, Missouri, Arkansas, South Dakota and Oklahoma, pro reform forces have been taking action to ensure that adult voting initiatives are included in each state's November 2022 vote.

On February 14, 2022, during a stopover in Southern California, U.S. congressman Tim Ryan of Ohio said that Ohio, which has been a legal state for health care since 2016, is expected to legalize adult use in the November 2022 vote. He speculated that this may interest college age voters.

Other medical law states, including Delaware, Minnesota, New Hampshire, Hawaii and Rhode Island, currently have members of their legislatures proposing and promoting the legalization of cannabis use by adults.

99% of Americans live in areas that are somehow legalized

The United States has about 330 million residents. Almost 99% of U.S. residents live in places that are legalized to some extent. The legalization pyramid shows that less than 7 million of these 330 million people live in places where marijuana is illegal under state law.

Therefore, those seeking to start, diversify or invest in cannabis should consider the laws, regulations and practices of states (and U.S. territories). It is believed that more states will join the legalization process by 2022.